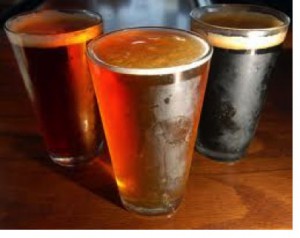 There is a revolution brewing (yeah get ready for more puns like these – you have been warned) in the craft beer industry and opinions are being reshaped as more brewers decide to package their beers in cans instead of bottles. In fact I was fortunate enough to attend the CANvitational beer festival hosted by Sun King Brewery in downtown Indianapolis in September and stood witness to the rows and rows of craft brewers who have decided that cans suit them just fine.

Which begets the obvious question: why? Why cans instead of bottles? Well let’s explore.

REASON #1: P-O-U-R-T-A-B-I-L-I-T-Y
Yeah I know I misspelled that word. I told you to brace yourself for more beer puns. Weren’t you listening?

Cans are portable. So what? Ever been out walking on a beach and stepped on a piece of glass? More than likely it was because somebody was drinking some cold ones on the beach and uh-oh, the glass bottle broke somehow. Well if those cold ones were served in cans instead of bottles…no more ow-ies from glass bottles to worry about anymore.

Anybody like to drink beer while playing a round of afternoon golf? So much easier to tote around canned beer instead of bottles out on the course, right? And again, we eliminate the hazard of broken glass. Same goes for camping, boating (passengers, not driver), or any other outdoor entertaining that involves an appropriate time to enjoy a good beer.

Do you think vendors at ball-games like to carry a case of bottled beers around instead of those light aluminum cans? Nope, cans win again at these venues because they are portable (there, I spelled it right for you this time).

REASON #2: COST
Let’s play a quick imagine this scenario. Imagine this: you are a cash-strapped start-up entrepreneur who is ultra-confident in your product and have done your homework to know that there is a market ready and willing to buy your product. That said, you don’t have much – if any – control over how much your product can be sold for (and will likely have to go through 2 layers of distributors then retailers who each take their healthy cut of the price before your product is made available to consumers). But by simply packaging your product somewhat differently, you can save substantial money on production costs as well as shipping costs. You’d be silly not to take advantage of this cost-savings as long as it a.) doesn’t negatively affect the quality of your product and b.) doesn’t have a negative impact on your overall sales potential.

This is what cans do for craft beer. It lowers the overall cost of packaging and shipping, while still maintaining visibility on the shelf. And it does not harm the overall quality of the beer. In fact…

REASON #3: Beer maintains its quality BETTER and LONGER when packed in CANS

What are the elements that have a negative impact on the quality of beer? Light and air. With beer tightly enclosed inside of an aluminum can, there is no light penetration – as opposed to bottles. Some people wonder why beer is packaged typically in brown or green bottles. That is because light has a harder time penetrating through those bottles as opposed to clear. But light does still penetrate the bottles. Not so in aluminum. The seal of beer cans is also a much tighter, longer-lasting seal than that of caps on bottles. Who wants to drink a flat beer that’s lost its carbonation? That’s not a concern when the beer is packed into cans.

“But Lu,” you may interject, “my beer-snob, hipster lips might fall off if I drink directly from an aluminum can.”

My retort is simple: do you drink beer directly from the bottle? Personally, I don’t. So much of really getting the full taste of a beer involves drinking it out of the proper receptacle. So, depending on what type of beer I am drinking, I will typically pour from glass bottle (or can) into a pint glass or pilsner or snifter. I think of it this way: if I were to drink this beer at the brewery that it was made in, what glass would they serve it to me in? You get all those great aromatics and hoppy essence that comes with craft beer when you drink it out of the proper container. So I declare the aluminum can taste argument a non-sequitur. If this is your argument, you are already drinking beer the wrong way anyway…and you call yourself a beer snob!

Now if you find yourself outdoors at one of the places I described above (camping, golfing, boating, beaching, etc.), you can always pour beer from the can into a Red Solo Cup and problem solved again. Of course, at that point, I’m more than happy to drink directly from the can and have no issues with it – it’s less waste and I’m just happy to have great craft beer at any of those venues as opposed to the alternatives.

Longevity is the other side of the equation here, where cans are again the superior vehicle. Now I’m not one of those people that generally stores beer for long periods of time. Wine bottles are a different story. But if I buy beer, generally it is going to be consumed within a week or two of purchasing. However, if I wanted to buy and store beer for a special occasion or just because somebody happened to have a particularly great deal on my favorite brand, I know that I would be much more inclined to stock up on cans instead of bottles. Over time, bottles will result in skunky beer if they are not drunk within a certain amount of time. Air gets in, light gets in and the end result is wasted beer…i.e. alcohol abuse. That is not the case with cans. Beer stays much fresher for longer periods of time as light and air do not penetrate the bubbly goodness and so its quality remains intact.

In conclusion: it is time that we beer snobs – either those of us in recovery, or those of us that are still current snobs – come to the proper conclusion that canned craft beer is not only every bit as good as bottled craft beer, but in many ways superior to it. I didn’t make the environmental eco-argument for or against either because there are too many good arguments on both sides, so we’ll call that one a draw. If you’ve hesitated to get in on this movement towards craft cans, now is as good a time as ever to jump in and give it a try. Might I suggest a Rochester Mills Milkshake Stout or a Brewery Vivant Triomphe for my Michigan readers or perhaps an Upland Brewing Wheat Ale or Evil Czech GG Patton Pilsner for my Indiana pals. I’m sure you’ll be able to find something that you love.

Next week, in Part 2 of this series, we will look at the Mobile canning and shrink-sleeved cans contributions to the Can-volution that is taking place and explain how and why more options of great canned craft beer will be hitting store shelves near you soon. Cheers everybody!

For our friends who are actually making the beer – Mossberg is now able to create on-demand shrink sleeves for you at a low price in quantities for small or large batches. We’ll talk about this in much greater detail in next week’s follow-up. Same bat-time, same bat-channel.